She liked my category Board Chick of the week so much that she just kept stalking me if ski girls could join as well. So, I made a Girl on Skies today for Niek (21) from Utrecht, Holland. She was al professional skier from her 9th ti 19th age en was also a teacher for a few years. Skiing is now more of a hobby to her, but joining a contest now and then is something she likes to do! So, let’s meet the Girl on Skies | Nieke Tebeest from Holland!

Evey: As alsways, we’re curious about how you first came in touch with skiing?

I grew up in a skiing family. My parent went on skiing holidays since they were young. So, there was me a 4 year old skigirl. Later when I was older I teached it my self and when I was 9 they asked me to for a raceteam.

Evey: Ahh that’s cute a young skigirl. Are there also thing you’re afraid of when skiing?

Yeah sure! While training in Austria, one of my teammates felt really hard. We thought she broke her back, but luckily it wasn’t that bad. Since then I started wearing a backprotector. There’s always a risk ofcourse. 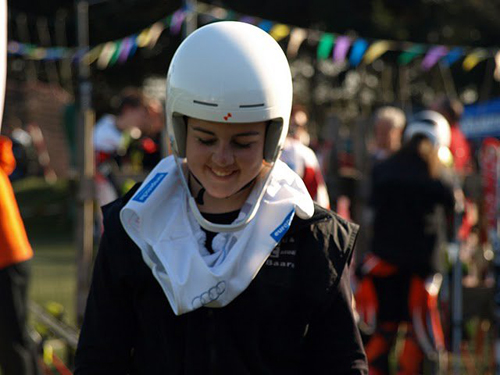 Evey: What do love the most about skiing?

I like tob e in the mountains and breathe they air. But also in Holland it’s great to feel the wind. When skiing I can really settle down. It might sound weird, but I love it! The best experience? 3th place at the Dutch Championship in 2010.

Evey: How often do you practise and how do you stay fit

I don’t practise that much anymore, maybe a few times a year.  Sometimes I do teach one in a while. I always exercised twice a week at the gym to stay fit, still do.

Austria, fors ure. I’m a big fan of the Kaprun. I also hope to ski in America one day! But it might be hard to take all your gear with you.

Evey: What else do you do besides skiing?

Well, there’s the gym like I said. And I’m a big fan of movies and television shows. I also study (Communication & Media Design) and recently moved to London to graduate!

Evey: How would you describe your style?

I think as a ‘nerdy-rocker’, I love t-shirt from bands, movies and all around it. I also dig the rock style, so studs, Dr. Martens, Creepers en that kinda thing.

Evey: Do you have any plans for the summer?

I recently went to the slopes already, unfortunately. But in summer I might go to Spain, visite my boyfriends family. And we are planning to travel when I graduate, maybe New York?

P.s. Nieke thanks for the stalking, it was great interviewing you ;-) You can follow her on Far Beyond Believing and she will update us on her adventures in London on Style Spy very soon!

Curious about what others think? Skiing or snowboarding? Read what the readers of Style Spy think over here.

Surfing in the UK (yes, really)